Nebraska’s One Bucket List Item is “Giggling in Front of a Capitol”?

Of all the cool things to do in Nebraska, even this juvenile act didn’t come to our minds!

“Travelocity” published an article on the “most incredible thing you must do in all 50 states”.  Immediately, attending a Nebraska football or volleyball game comes to mind . . .  or perhaps attending the College World Series . . . or maybe checking out the world’s largest Kool Aid stand or visiting Carhenge.

No doubt some neat history, but really??  Did a bunch of Iowans write this article?  All Nebraskans (should) know that if there’s one penis we want to see in Nebraska, it’s the “Elk Penis” . . . aka Chimney Rock. 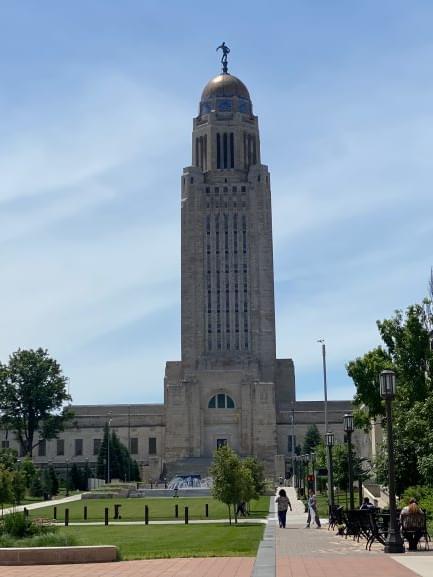 If you’re looking for a new stuck-at-home kitchen challenge . . . well, this is something that exists.

Heinz just released some recipes for making homemade ice cream . . . based on their condiment flavors.

So if you’ve ever wanted to try ketchup, mayo, or barbecue sauce ice cream, now you can make it yourself.

The recipes are all pretty simple . . . mostly just adding heavy cream, condensed milk, whole milk, and a few large squeezes of the condiment to a bowl, mixing them up, then freezing them.

But they also have suggestions for TOPPINGS, like raspberry sauce and meringue crumbles on your ketchup ice cream, or bacon bits, pecans, and maple syrup on your barbecue sauce ice cream.

Here are the recipes for ketchup, mayo, and barbecue sauce.  They’re from Heinz in the U.K., which is why some of the condiments have different names.  And here’s a picture.

According to a recent survey, 14% of people say YES . . . at some point, their house did run out of THIS.

TODAY’S BLOG — Kraft is trying to make Macaroni-and-Cheese a breakfast food … Describe what you do for a living, but as a crime … A company is looking to hire couples to have sex on different mattresses … VIEW GOOD NEWS & VIEWS SUBMIT GOOD NEWS & VIEWS Contests on The Morning Crave… 7:20am  Whatchamacallit Wednesday…… END_OF_DOCUMENT_TOKEN_TO_BE_REPLACED

TODAY’S BLOG — Should you put your sheets in the freezer to stay cool at night? … A cleaning expert says you should stop rinsing dishes before putting them in the dishwasher … A woman’s marble cutting board accidentally featured marbled genitalia … VIEW GOOD NEWS & VIEWS SUBMIT GOOD NEWS & VIEWS Contests on The Morning…… END_OF_DOCUMENT_TOKEN_TO_BE_REPLACED

TODAY’S BLOG — New Music Friday: “cardigan” by Taylor Swift … Four things to look forward to in August … The 10 signs your relationship will fail, according to science … A woman goes on a rampage after she comes home to find her husband with another woman … VIEW GOOD NEWS & VIEWS SUBMIT GOOD…… END_OF_DOCUMENT_TOKEN_TO_BE_REPLACED