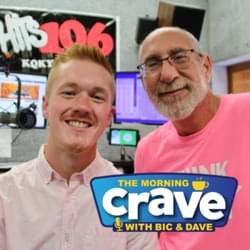 Story 1:  Four Thanksgiving Foods You Shouldn’t Give Your Dog

If you’ve got fewer guests and more leftovers this year, don’t just give them to your dog.  A lot of the stuff we eat on Thanksgiving isn’t good for pets.  So before you give them anything, do your research.

In general, avoid anything with lots of ingredients, like butter, salt, and other spices.  Here are four of the worst Thanksgiving offenders when it comes to pets . . .

But sugar-free stuff is even worse.  There’s a sugar substitute called xylitol.  (ZYE-leh-tall)  And it can make their blood sugar plummet and cause liver failure.  It tends to happen fast, so be really careful with anything sugar-free.

Story 2:  The Non-Traditional Thanksgiving Foods Each Part of the Country Loves Most

Are there any foods you ALWAYS had on Thanksgiving, even if other people didn’t?

Someone looked at the most popular NON-traditional foods people are serving tomorrow in different parts of the country.  Here are the favorites . . .

Story 3:  Is This the Most Accurate Thanksgiving Food Ranking Ever?

A new study polled 1,300 Americans on 42 different foods.  But instead of asking for their favorite, they did a series of one-on-one matchups.

Each food went head-to-head, and people had to choose.  For example, “turkey vs. stuffing,” or “mashed potatoes vs. gravy.”  Then the researchers ranked them according to how many matchups they won.  Here are the top ten Thanksgiving foods . . .

Green bean casserole only won 57% of its matchups, and cranberry sauce won 52%.  But LAST place wasn’t even close.  Tofu or Tofurkey only won 13% of its matchups.  No other food won less than 30%.

Whatchamacall… a federal holiday in the United States celebrated on the fourth Thursday of November, originated as a harvest festival, and to this day the centerpiece of the event is the dinner?

According to a recent survey, 42% of people say the person or people who didn’t cook should do THIS.

TODAY’S BLOG — There might be something wrong with your body if you crave chocolate … The top dos and don’ts of drinking wine … A woman sends a note to a jail giving it four-and-a-half stars for her stay … Contests on The Morning Crave… 7:20am  Story Problem Tuesday (Amigos) 8:20am  Survey Says?! (Raising Canes…… END_OF_DOCUMENT_TOKEN_TO_BE_REPLACED