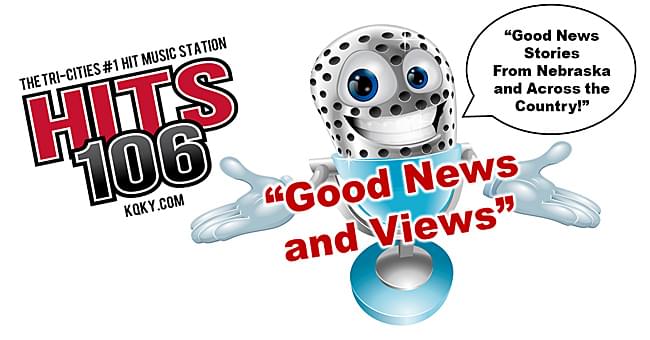 Hastings Kiwanis is installing outdoor musical playgrounds at eight area schools.  They started the $80,000 project to celebrate its 100th anniversary and give back to the community.  Most ensembles include seven tall tubular bells, a large babel drum and colorful rainbow sambas.

The 2020 Nebraska Hand Cornhusking and Fall Festival will be taking place October 3rd at Nebraska Prairie Museum in Holdrege.  Visit their Facebook page for more information.

A few months ago, Paul Homan of Lexington started a new tradition of displaying a flag on his property.  Every night at sundown he takes down the flag, and every morning he puts it back up while saying the Pledge of Allegiance followed by singing the National Anthem and God Bless America.  Recently, children from a nearby daycare noticed Homan’s new tradition and are now participating in the routine.

The Nebraska State Fair, which is August 28th to September 7th, will be “a celebration of Nebraska 4-H and FFA youth.”  The 4-H events will take place the first weekend of the fair and the FFA will happen the second weekend.  Ten food vendors and 20 commercial vendors will be on hand.  Unfortunately, there will be no concerts inside the Heartland Events Center, but there will be shows outdoors at night.  Admission to the 2020 Nebraska State Fair will be free.

RECENT LOCAL UPDATES AS OF 9-24-20 . . . The University of Nebraska at Kearney is partnering with College Park at Grand Island to bring expanded educational opportunities to central Nebraska. College Park was created to establish a pathway for adult learners to earn degrees and address the need for skilled workers in the region.…… END_OF_DOCUMENT_TOKEN_TO_BE_REPLACED

TODAY’S BLOG — The most embarrassing thing each state googles more than anyone else … The top Halloween costumes for kids, adults, and pets this year … A website will tell you if you’re “young” or “old” for your job … VIEW GOOD NEWS & VIEWS SUBMIT GOOD NEWS & VIEWS Contests on The Morning Crave……… END_OF_DOCUMENT_TOKEN_TO_BE_REPLACED