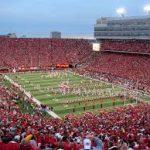 Nebraska Athletics has tested roughly 250 athletes and staff since voluntary workouts began and there have been eight positive tests, including five football players and one football staff member. That’s according to coach Scott Frost. Of those six members of the football program, two players and one staff member showed up in Lincoln from other locales and tested positive. Three other Husker players acquired the virus in the community. Frost says because of strict protocols he is very sure that those people didn’t spread it in the community.

Despite challenges with recruiting dead periods the Big Ten conference has received commitments from 120 college football recruits for the 2021 class. Rutgers leads the way with 21 commitments. Nebraska is toward the bottom of the league with 10.

NSAA president Jay Bellar says the possibility of fall high school sports in Nebraska remain a fluid situation. Bellar says the organization is in contact with University of Nebraska Medical Center officials and will likely know more of how the season will look in two to three weeks.

The NSAA board is taking a wait and see approach to starting bowling as a sanctioned sport in 20-21 due to the economic impact of coronavirus and other uncertainties. Some 39 schools have expressed interest in the sport and have until September 1st to register. The board will likely not make a final decision on this season until their September meeting.