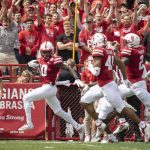 Prolific wide receiver and returner JD Spielman has played his last game as a Husker.

Spielman intends to enter his name into the transfer portal, as first reported by Sean Callahan of Husker Online. He has been away from the team since March 2, when head coach Scott Frost said Speilman was home dealing with a personal health matter.

“Everyone’s focus right now is on JD’s well-being and providing him with the appropriate support,” said Frost at the time. “We anticipate JD returning to the team in time for summer conditioning.”

But Spielman did not return last week with others that were allowed to be back on campus for voluntary workouts. His name is no longer on the team roster at Huskers.com.

Since Spielman has not graduated, and the NCAA did not approve sweeping legislation for a one-time transfer policy, he will need to apply for a waiver if he hopes to gain immediate eligibility. He used a redshirt season in 2016, which means should a transfer waiver be denied, the senior-to-be will not be allowed to play at another FBS school.

Spielman ends his Husker career second all-time in career 100-yard receiving games with eight. He is also third all-time at the school in receptions at 170 and receiving yards with 2,546.

Sophomore Wan’Dale Robinson is now the most veteran receiver in the room in terms of on-field experience at Nebraska for scholarship players.

Since the COVID-19 pandemic shuttered the sports world, Speileman, quarteback Noah Vedral, and defensive back Henry Gray have all left the program, while 14 total scholarship players have left since the end of the 2019 season.