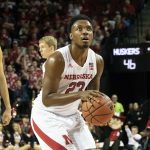 Shorthanded. Had lost eight in a row. On the road against a top-10 team.

The effort fell short, but Tuesday night showed what Fred Hoiberg is building in Lincoln.

Dachon Burke Jr. had started all 23 games this season but didn’t make the trip due to the flu. That meant a new starting lineup, this one including the regulars of Cam Mack, Thorir Thorjarnarson, and a hobbled Haanif Cheatham, but also saw Jervay Green get back to it while Kevin Cross made his first career start.

If the Huskers have been consistent with anything this season, it has been coming out of the locker room and digging a hole. That wasn’t the case in College Park.

Cheatham got a layup in the first minute to spark a 15-9 run as the Huskers hit 7-of-8 to start the half and close the gap to 47-40. A couple minutes later, a 14-5 run that included a pair of Matej Kavas buckets cut the lead to 56-54 at the 7:37 mark. Maryland answered by scoring the next eight and the teams played square up until the final minute.

Trailing by seven, Cross made his first three-pointer with 39 seconds left. On the ensuing inbound, the ball was knocked free where Akol Arop dove on it and passed it to Cheatham who was fouled on the shot. Cheatham made 1-of-2 to cut the lead to 71-68. No steal on the next inbound, but a foul put Maryland at the line with 22 seconds left.

Jalen Smith missed the front end and Maryland elected to foul Mack with 12 seconds to go. Despite shooting less than 60-percent from the stripe this season, Mack knocked down both free throws to make it just a one point game.

After another foul to send the Terrapins back to the line, Anthony Cowan missed his free throw, giving the Huskers a chance at the upset. Crossing the half court line, Mack had the ball with everyone spaced out. Mack took a straight-line drive down the right side of the lane to attack the rim, but was met by a plethora of help defense, including the 6-10 Jalen Smith who blocked the shot.

Maryland grabbed the rebound and was fouled where they made 1-of-2 to survive with a 72-70 win.

The Terrapins shot 48.1-percent from the field, including 7-of-23 from deep, but were committed 20 turnovers on the game that led to 19 Nebraska points.

The Huskers shot 40.7-percent on the game, including a lackluster 7-of-33 from beyond the arc.

Despite not practicing since the Iowa loss, Cheatham led all scorers with 20 points on 7-of-11 shooting while grabbing six rebounds. Thorbjarnarson scored 15 points and grabbed a team-high seven rebounds. Kavas was one off from his season-high, scoring 11 points.

Mack shot just 1-of-10 on the game, scoring four points, but he did dish out eight assists. He now has 156 assists on the season, and moves past Tyronn Lue (152) for fifth place on Nebraska’s single-season assists list. Brian Carr holds three of the top four spots, with number four being 166 assists in 1986-87.