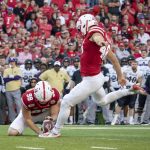 A big throw from a transfer backup quarterback from Wahoo, and a game-winning field goal from a walk-on transfer safety turned fourth-string kicker from Norfolk. That’s how the 2019 edition of Nebraska (4-2 overall, 2-1 B1G) versus Northwestern (1-4, 0-3) ended Saturday in Memorial Stadium, with the Huskers on top 13-10.

Noah Vedral was called into action after starting QB Adrian Martinez suffered a leg injury at the end of the 3rd quarter. He led four drives, the last of which proved decisive. With the score tied 10-10 and just 52 seconds remaining, Vedral fired a deep pass down the right sideline to Wan’Dale Robinson for 32 yards that got NU into field goal range at the Wildcat 16 yard line.

Lane McCallum had not made a field goal in his brief college kicking career when the day began. He made one of two in the first three quarters, and had the chance to end it from 24 yards away. After Northwestern head coach Pat Fitzgerald tried to ice him with three straight timeouts, McCallum launched a low-trajectory kick between the outstretched hands of Northwestern special-teamers and through the uprights.

McCallum recalled his emotions as the kick was sailing through the air. “I didn’t think that thing was going in when it left my foot. I looked at it and it was really low and I was like ‘Oh crud.’” His coach agreed. “I’m 44 years old – I could have jumped as high as he kicked that,” head coach Scott Frost joked after the game. “I think we were due a break somewhere. I’m happy for him.”

On the receiving end of the Vedral pass, the true freshman Robinson did a little bit of everything for the Big Red. He caught seven balls for 123 yards, and ran seven times for 44 yards and Nebraska’s only touchdown. He was responsible for the four longest offensive plays of the day: a 42 yard TD run in the first quarter, and receptions of 24, 49, and the aforementioned 32-yarder that set up the final kick. “These are the moments you live for,” Robinson said. “I came in wanting to make plays and have a big impact like this in a game like this.”

Defenses dominated on a windy day in Lincoln, with 19 total punts and ten total 3-and-outs. Senior cornerback Lamar Jackson forced the only turnover of the game, an interception of Northwestern quarterback Aidan Smith with just one minute left in the contest. For the first time in the Frost era, Nebraska did not turn the ball over once, and the Huskers won the turnover battle as a result. Cam Taylor-Britt and Colin Miller each forced fumbles in the second half, but Northwestern was able to maintain possession on both.

Northwestern did find some success running the zone read against the Blackshirts. Smith converted three first downs on the ground in the first half keeping on zone read plays. Then, after Nebraska took a 10-3 lead into halftime, the Wildcats ran that play five times on a TD drive to open the third quarter. Smith finished the drive by scoring on a two-yard run, their only touchdown. He led the Wildcats in rushing with 64 yards on 16 carries, and completed 19 of his 32 passes for 136 yards. His final pass of the day, though, proved costly. “I thought he played very hard,” Northwestern head coach Pat Fitzgerald said. “I can’t blame him for that last interception.”

Martinez was not the only offensive star to leave the game with an injury. Junior wide receiver JD Spielman was also knocked out in the second half and didn’t return. “Neither one are too serious,” Frost said.

Before his injury knocked him out of the game, Martinez had completed 13 of 20 passes for 145 yards and added 26 on the ground. On two third downs, he rolled left and threw across his body and converted the first down both times. Senior wideout Kanawai Noa and sophomore tight end Austin Allen were on the receiving end, and both were able to keep one foot in bounds.

Sophomore running back Maurice Washington did not play in the first half. Frost revealed that he held Washington out for a violation of team rules. “We need to be able to rely on him all the time. And that was my decision to hold him out the first half.”

The Huskers will hit the road next weekend. Minnesota hosts the Big Red Saturday at 6:30pm.