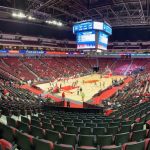 After having lost four games in a row and seven of the last nine, Nebraska desperately needed a win on Thursday. Boy, the Huskers did just that.

“Certainly feels good to get a win, and to do that at home for our fan base and for our team right now is important,” said Nebraska coach Amy Williams. “We’ve been striving to put together four quarters and 40 minutes. I wouldn’t give us 40 yet, but it was closer.”

Penn State cooled off in the second quarter, but Nebraska couldn’t close the game thanks to going 3:46 without a field goal. As the Nittany Lions extended the lead back to seven with 2:49 to go in the half, the Huskers six free throws and an Isabelle Bourne jumper to lead 32-31 going into the locker room.

Through the first two quarters, Ashtyn Veerbeek already had 10 points while Nebraska shot 9-of-10 from the free throw line. Penn State had yet to get to the stripe.

Nebraska took that end of half momentum and dominated the third quarter. After missing the first shot, six players helped Nebraska make the next nine as part of a 26-12 quarter. At one point, the Huskers had a 16-5 run.

“I thought that we were playing a little bit with pace and we found some open passes,” said Williams. “Some good team basketball, just getting good shots for our team. That third quarter was an efficient quarter for us.”

The fourth quarter was elementary, with Penn State never than 12 and Nebraska leading by as much as 20 before reaching a 75-58 final.

After the hot shooting first quarter, Penn State never shot better than 29-percent in any subsequent quarter, ending with a 31.9-percent clip and only hitting 8-of-29 from deep. The Nittany Lions made all six free throw attempts.

Nebraska used that 79-percent third quarter to carry 46.6-percent shooting for the game, including 6-of-12 from beyond the arc. The Huskers made 15-of-17 from the stripe.

Leigha Brown had a game-high 20 points to go with six rebounds. Veerbeek(12), Bourne(11), and Sam Haiby(10) also reached double figures. Kate Cain had a game-high six blocked shots as Nebraska matched a season-high 12 as a team.

“Penn State poses a unique challenge in transition,” said Williams. “I thought in the first half that there were some times we got kind of confused with what our coverages were in transition and then I thought we really communicated well as a team to shore that up and correct that problem. We really wanted to try to clog the lane and build a wall there.”